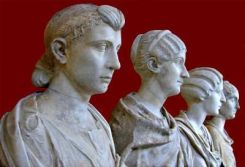 Pheroras’ wife fascinated me: A handmaiden/maid servant who married a Tetrarch and who had a prophecy that the kingdom would come to her and her children when Herod died. I had to try to find her. I made a list of the things Josephus had so far told us about her… END_OF_DOCUMENT_TOKEN_TO_BE_REPLACED

Queen Salome Alexandra died knowing that her younger son was hell-bent on destroying what peace she had managed to hold together. As Josephus tells it, Hyrcanus, the eldest son, the High Priest and Regent when their mother died, was a wimp…and a Pharisee.  Aristobulus was a dashing warrior-type Sadducee, the high priestly party. Aristobulus basically told Hyrcanus to move out and leave the government to him and he wouldn’t kill him. Hyrcanus took the deal. Aristobulus moved into the palace and Hyrcanus left and became a “private man.”

No country operates in a vacuum and there was more going on than simple rivalry between brothers or Pharisees and Sadducees. Years before, “King Alexander and his wife” had appointed a man named Antipater to be the governor of Idumaea, an area conquered by John Hyrcanus and forcibly converted to the Jewish religion. Antipater became Rome’s adviser to Hyrcanus II. He insisted that Hyrcanus stand up and fight his brother for the kingdom…because their neighbors preferred the peaceful Hyrcanus on their borders to the warrior Aristobulus…and Rome preferred a civil war in the tiny nation that would make it easier for them to come in and take over. (Antiquities of the Jews XIV. II. 3)